The final set of screenshots from the final episode of Planet Of The Apes.

This episode formed the second half of the fifth TV movie Farewell To The Planet Of The Apes (paired with Tomorrow's Tide), originally broadcast in 1981.

The final episode to be broadcast (6th / 20th December in the USA, 19th January 1975 in the UK), this was also the fourteenth and final episode filmed, chronologically, according to the Production Code. 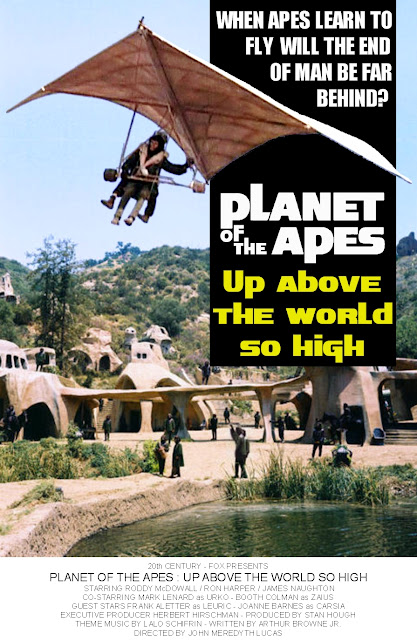 And thus ends the saga of Planet Of The Apes. As we now know, Virdon and Burke eventually found their computer in another city and disappeared into space as suddenly as they’d arrived.

This final instalment marks the end of a labour of love for your humble host. There are 440 animated screenshots across the 11 weeks of Up Above The World So High - the most out of all fourteen episodes - and a total of over three and a half thousand for the entire series, created in a mad four-month period in the spring and summer of 2019.

I hope you've enjoyed reliving those wide-eyed days of 1974 when Sunday evenings were anticipated with bated breath, and Mums and Dads were shushed into silence.

Gaz
post-footnote: that's not the end of Archives Of The Apes, though. The Apes will be back as usual this coming Saturday for a look behind the scenes of Planet Of The Apes (1968). See you then!
Posted by Honeypot Designs at 16:30

Archives Of The Apes 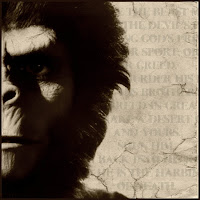 Welcome to the Archives Of The Apes. This blog celebrates everything about the mighty PLANET OF THE APES saga, from Pierre Boulle's original 1963 novel La Planète des Singes, via the classic films of the Sixties and Seventies, the short-lived 1974 TV serial and its animated follow-up and Tim Burton's ill-conceived and much-despised 2001 "re-imagining", right up to date with the latest entries Rise, Dawn and War. Here you'll view a lot of seldom-seen images, many of them courtesy of my friends Angela May Rushmere, Vince Blosse and Felino Velasquez. Also included are Apes fan art, comic art, international movie posters and book covers and a number of images from our own classic film of the seventies, Cornelius And Zira. Sincere gratitude goes out to Hunter Goatley, Ste Edwards, Brian Brady, Andrea Hughes, John Roche, Tim Parati and Mark Talbot-Butler for publishing a lot of the rarer material. Please note: all original images were found on the internet and are assumed to be in the public domain. Any copyright infringement is accidental and unintended and should not be inferred. Finally, I am a mere primitive Human and as such I may make the odd error. Please forgive any gaffes, or better still, enlighten me! Cheers!